Rendered Retina are passionate about creating striking, energetic and visual performances that let loose our audience’s imaginations. From pulsating and fun-filled adaptations of Shakespeare’s classics to playful and physical explorations of human nature, we want our work to leave lasting images with those who see it. 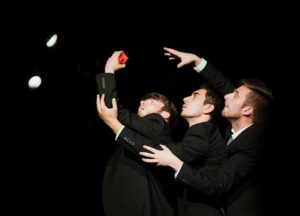 Formed out of a passion for creating work, we are constantly looking for inspiration for our next performance, drawing on our own experience as well as our daydreams and things we see. Having known each other for 11 years and worked closely together as practitioners for 5 years, our work is extremely collaborative and the trust that has built through this allows us to test the limits of the theatre we create.

Tom Mangan: Tom graduated from the University of Kent with a masters degree in Contemporary Performance Practices in 2017. He was one of the founding members of Rendered Retina. Tom works as a practitioner for the Mercury Theatre, Queens Theatre Hornchurch and the Complete Commedia Company leading workshops for young people aged 5-18. He has also worked as a practitioner for Studio 3 Arts, Theatre Royal Winchester and Dukes Theatre Lancaster.

Alex Mangan: Alex graduated from the University of Winchester with a first class honours degree in Performing Arts (Contemporary Performance) in 2015. He currently works as a Lamda tutor and drama teacher. He has worked with Strange Arrangements Theatre Company for the re-working of their show Drifters and has toured the show across the UK as a cast member.

Jordan Choi: Jordan graduated from the University of Kent with a masters degree in Contemporary Performance Practices in 2017. He was one of the founding members of Rendered Retina when the company formed in 2012 as T3G Theatre. He is also a core member of the Complete Commedia Company. He has previously worked as a practitioner for Theatre Royal Winchester and the Mercury Theatre.